I’ve made it clear to everyone who knows me, but Supergiant Games are quite easily my favorite indie developers out there. Their games have consistently surprised and engaged me with their eye-catching visual direction, masterful and diverse soundtracks, intriguing stories, and exciting gameplay. Something I’ve written about before is my love of the company’s ability to meld their gameplay and narrative together to create experiences that really couldn’t be made in other mediums. This month, the studio released their latest offering, Hades, on early access, so I’ve been taking breaks from the new Smash Bros to get some runs in. I was worried that Supergiant’s fantastic storytelling was going to take a backseat this time around when I saw the game was a roguelike, but of course that was naive of me. Hades, even in its early stages, impresses as a roguelike that not only guides the player into that “just one more run” mentality, but also finds the rare treasure of making me slightly excited about dying.

Simply from the get-go, the gameplay loop of Hades in terms of narrative is a bit different from almost all other roguelikes. The game sprinkles its overall plot throughout the

stages of the game, which is already more substantial than many games that just give the player a premise and maybe a cutscene when they beat the game. Players control Zagreus, the son of Hades, as he attempts to escape his father and the Underworld. What’s even more interesting is the fact that the game will progress the narrative a bit further just from playing the game and dying many times. Various plotpoints will spring up after some of your deaths, seemingly at random but definitely well spaced out. This keeps the player motivated and keeps the pace from stagnating if the player doesn’t make it very far after many runs.

This lack of real drive is what turns me off from most roguelikes. Many love the games for their endless replayability due to random generation, but I’ve never been wowed by the randomization because it doesn’t feel like my experience is truly different every time. The fact that Hades tries to grab a player like me and push me forward by drip feeding me story makes me genuinely excited to keep playing, even though there’s roughly nothing gameplay-wise that is tackling this issue of mine.

Speaking of gameplay, something else I feel the game succeeds at is what it has the player carry through between runs. Players collect a slew of different items and upgrades during runs to power them up, but the Ambrosia, Darkness, and Skeleton Key items stay with the player even after death. Ambrosia can be given to any character in the game,

from the characters you find in the house of Hades to the gods and bosses you encounter during your runs. In return, these characters will give the player a Keepsake that gives them a perk, like extra starting health or boosting a certain god’s perks. Darkness is used to progressively upgrade a few abilities like how many dashes Zagreus can perform and how much damage backstabs deal. Finally, Skeleton Keys can be used to unlock new weapons or new Darkness abilities. These items make death feel more like an upgrade rather than a setback, in comparison to other roguelikes, because even after losing all your run’s progress, you’re still getting stronger.

Something Supergiant does well in every release is giving players a myriad of options to toy around with and find a playstyle that fits them. In Transistor, the player was given information about Cloudbanks residents as they used their abilities in different combinations. In Pyre, the player’s most-played characters would be benched or would have to be sent back to the Commonwealth if the player wanted to succeed. These options take on a different motivating factor in Hades due to its roguelike nature. There aren’t many designed forces pushing the player to diversify their playstyle, but the fact that they have to keep trying over and over gives them an excuse to try different weapons and Keepsakes to see what gets them further.

Going back to narrative, I feel like this aspect of the game is what has kept me engaged. Personal progression is certainly driving me forward, but the piecemeal delivery of the narrative as you play more and more runs works really well. I love that Hypnos always has something to say about the different ways I died on my last run. I really enjoy 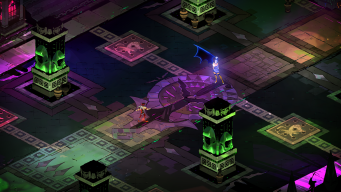 checking in with Nyx and Cerberus and all of the character sitting around, just to see what new dialogue they may have to flesh them out. These work really well to deepen the world through its characters as they seem much more believable and deeper than a single character trait. One notable experience happens after the player beats Megaera, the first boss. Meg is Zagreus’ ex-girlfriend and has been summoned by Hades to stop his son from escaping. When talking to her in the house of Hades after the fight, she seems upset about the entire situation and still clearly respects Zagreus, understanding what he’s trying to do and hoping he understands her place as well. It came across as extremely human and really made me care about her more.

These moments of character interaction, along with the systems that allow for the player to keep getting stronger through both gameplay and stats, allow for a gameplay loop that really made me enjoy death and kept me playing. Though the game is still in development, it’s impressive to see the amount of time the team spent on making this a game on equal footing in overall quality as their past releases, and I’m beyond excited for what is coming.